Goelogic hazards are natural forces or conditions that exist or could possibly exist that threaten your property or building.

While there are many different types of geologic hazards, Florida is subjected to a smaller amount than most areas of the world. 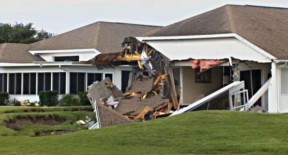 Common types of geologic hazards seen throughout Florida, according to the Florida Geological Survey, include:

The geologic hazard most commonly threatening Florida buildings and properties are sinkholes. There are three major types of sinkholes common to Florida.

These sinkhole types are distinguished by their mode of formation; the type of sinkhole that may develop in a given area is controlled largely by the local geology and hydrology.

Solution sinkholes occur in areas where limestone is exposed at the land surface or is covered by thin layers of soil and permeable sand. Solution is the most active at the limestone surface along joints, fractures or other openings in the rock that permits water to move easily into the subsurface. The result is a gradual downward movement of the land surface and the development of a depression that collects increasing amounts of surface runoff as its perimeter expands. 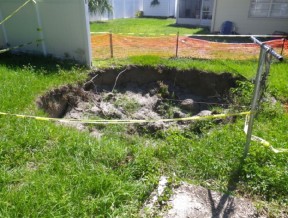 Cover-subsidence sinkholes occur where the cover material is relatively incohesive and permeable and individual grains of sand move downward in sequence to replace grains that have themselves moved downward to occupy space formerly held by the dissolved limestone; this process is called raveling. In areas where the sand cover is 50 to 100 feet thick, subsidence sinkholes generally are only a few feet in diameter and depth.